Lightening 3 is the fastest transmission protocol of current data lines with its speed hitting 49Gbps/s. Now Type-C serves as the interface carrier for it, while the latest USB4 released by USB-IF can use the Type-C interface only. Type-C has been used by a number of phones and some manufacturers, mobile devices has been accessible to charging due to the PD protocol since 2018. Apple also accepted the Type-C interface and the PD protocol after chaotic years. Eventually, digital devices hopefully ushered in the uniformity of interfaces. 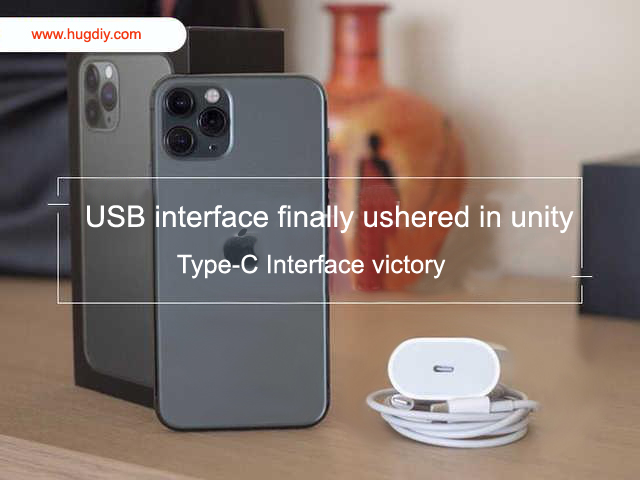 It has been a long time since our USB standard evolved from USB 1.0 to current USB4. Now we can get access to the high-speed transmission of 40Gbps through data lines with the USB interface changing.

USB4 has accepted the Lightening protocol 3 with its speed hitting 40Gb/s, less twice slower than the USB3.2 Gen2x2 protocol that has been released but not used. 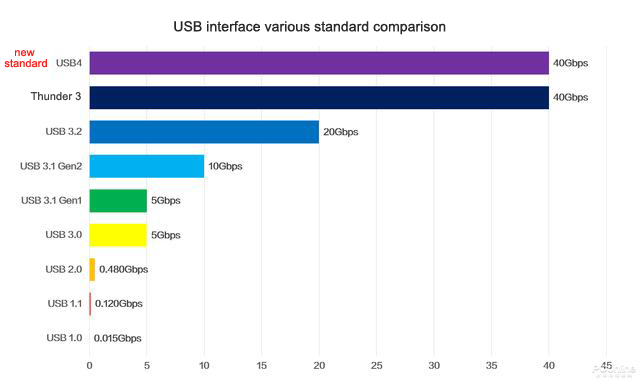 Unlike common USB standards, the Lightening 3 interface adopts the PCle 3.0x4 channel with a large band width, available to external disapply cards and displayers. And the USB4 interface accepting it also gains this function. Meanwhile, the new interface will remain committed to the excellent tradition of downward compatibility and the old USB standard (USB flash disk, keyboard, mouse, USB earphones can get access to through the Type-C interface). 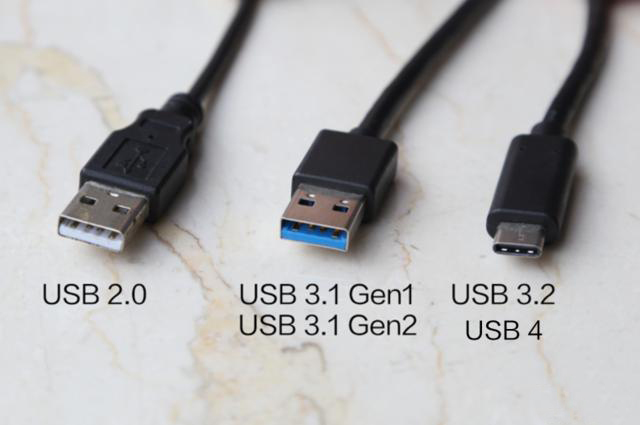 Former Type-A interfaces of 4pin have to seek for new interfaces since it fails to keep up the improving transmission speed. The debut of Type-C has solved this problem. The blue interface enables us to distinguish the new interface from the old one at our first sight when the USB interface approaches to the 3.0 standard. While not all USB interfaces on our computers are of USB standard 3.0 so far though it was rolled out ten years ago, let alone interfaces of USB3.1 Gen 2 or even USB3.2 standard (it must be carried by the Type-C interface, but it doesn’t mean that it can be considered as USB 3.2 as long as there I a Type-C interface). 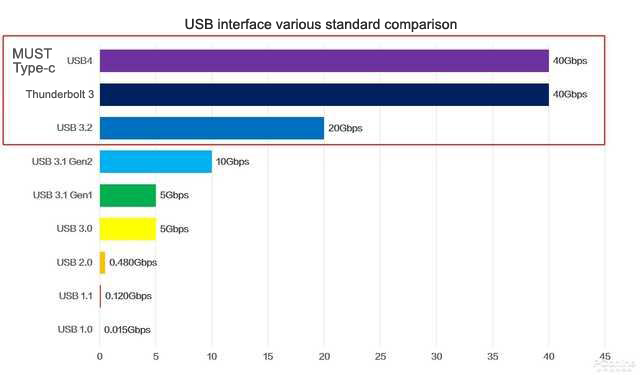 While people do not know how to use Type-C data interfaces clearly so far. At first, there were blue Type A interfaces on USB3.0, USB3.1 Gen1, and USB3.1 Gen2 whose other end was subject to the need of devices. The whole market has become more chaotic since the USB Type-C interface made its debut.
USB Type-C was supposed to be intended for USB 3.2 whose transmission speed is 20Gbps, making the USB3.2 standard possible. Its advantages including numerous contact pins were valued by lightening transmission protocol (40Gps) that can be carried on the USB Type-C interface, which made it the symbol of high end and high speed. Now USB 4 also uses Type-C interfaces, therefore, Type-C has made all data lines uniform.
Some manufacturers applied USB-Type- A and USB Type-C to the ends of their phones and PCs, while they said covertly or overtly that to use the Type-C interface can make faster transmission and charge speed possible. They also believed that they can gain profits of BUFF by applying USB Type-C to their phones and computers. Many consumers do not know these tricks. I even saw some manufacturers apply the Type-C interfaces to mainboards of USN 3.1Gen standard. Such a great trick. 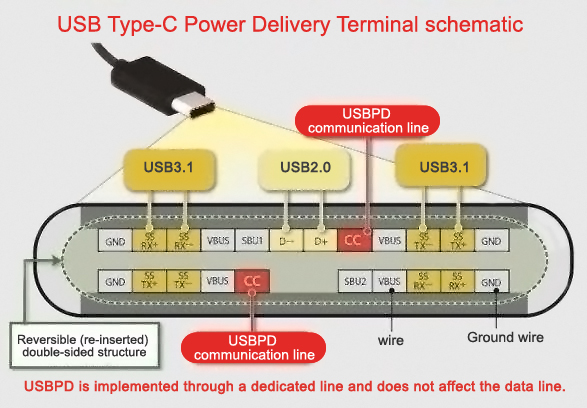 Actually, the Micro USB interface can load certain fast charge power in terms of current phones. A standard MicroUSB data line will risk dissipating heat since it withstands the highest current of 3A. That was why the fast charge power was limited to 9V/2A or 12V/1.5A when Micro USB data lines were commonly used. We can see that the contact pin inside the USB-C interface is denser than that of USB-A. Meanwhile, more contact pins make more channels available. 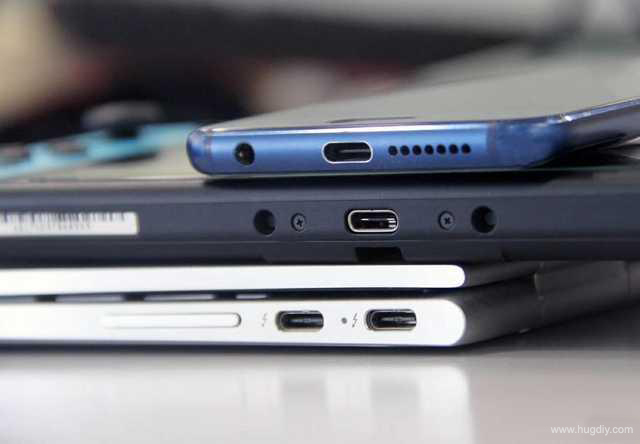 Type-C data lines used now can withstand the current of 5A and the highest voltage of 20V. Theoretically, the USB Type-C charge interface can provide the highest power of 100W. Xiaomi has shown a fast charge prototype of 100W with a Type-C data line before long. Meanwhile, unlike former messy data and charge interfaces, Type-C can also regulate the interface of each device. This standard is shared by a series of devices including laptops, phones, and switch with a small interface. Google has already forced the Android group to support the PD protocol before using USB interface, and compiled QC fast charge. Therefore, the Type-C interface is increasingly popular among mobile devices. 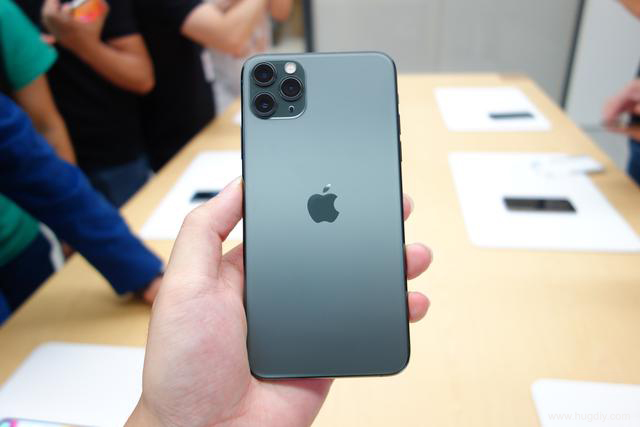 Meanwhile, Apple supported the Type-C interface and applied it to iPad products a few years ago though it likes to set and use individual standards. Now even iPhone supports the PD fast charge protocol, and iPhone 11 and above even adapt to 18W fast chargers. iPhone officially got rid of the standard of "five fortunes and one security".