From USB3.0 to USB4.0 had come, iPhone finally uses the same USB-C interface as Android

There is a component in our digital products such as mobile phones, computers and even TVs that is very important in our daily life but can be ignored easily. That is USB. As long as you have used computers or mobile phones, you would know how to transfer data or charge from your computer to your mobile phone. You just need to plug a data cable into your mobile phone, which is the USB cable. Although Apple switched the Lighting interface for its mobile phones these years, this line is just a variant of the USB cable. That is to say, most of the digital products and peripherals we use today use USB (interface) to connect. The changes of protocol and connector of this interface will of course have a profound impact on how we use digital products on a daily basis.

Just two weeks ago, we published an article predicting that the industry might introduce USB 3.2 in the second half of this year. After only 10 days, the industry ushered the new generation of USB data transfer protocol, USB4 (also known as USB 4.0), a more advanced technology). Although the update speed is obviously a bit unreasonable, but you can soon understand this once you know that the USB 3.2 specification is led by the USB Association, and USB4.0 is led by the USB Promotion Alliance. The current leader of the USB Promotion Alliance is Intel. He made a major decision in 2017, giving access of the original privatized Thunderbolt agreement to the public. (This technology is good, but if only one person can use it, it will be hard to promote, why not just share it with everyone.) The implementation of this move is exactly the most critical factor in USB 4.0. Which is faster, doing homework by yourself or copy one? USB 4.0 "learned from" Intel's mature Thunderbolt3 protocol, so basically there are no difficulties in the technical stereotypes and the implementation paths, the members of the association passed the protocol immediately. 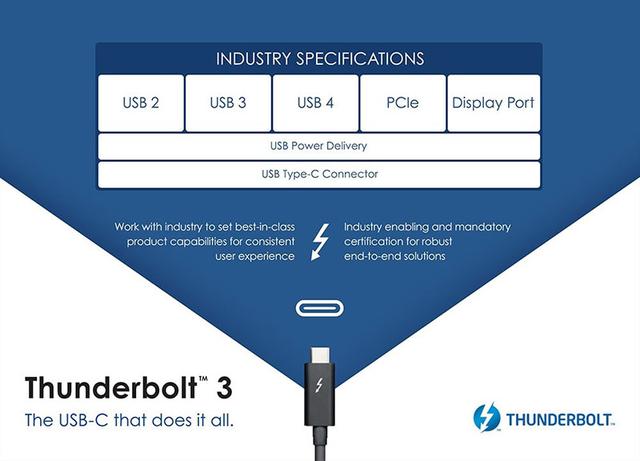 As a result, USB4.0 is a USB Type-C (USB-C) interface that directly connects to the CPU's PCIE bus (use lower CPU resources), with a maximum transfer speed of 40Gbps (higher transfer rate). It is also a new generation of USB peripheral transmission protocol that can transmits Displayport video signals (which can be used as video output) and USB PD fast charge streams (which can do fast charging) at the same time. It is essentially Intel's Thunderbolt3 technology, but it also supports the USB protocol. Therefore it can perfectly backward compatible with Thunderbolt3, USB3.2, USB3.1 and USB2.0 protocols (if necessary).

I believe the readers of this article are even more confused when talking about USB, because you would have heard a lot of USB’s names like USB2.0, USB3.0, USB3.1, USB3.1 Gen1, USB3.2 Gen2 , including the newly released USB3.2 and the latest USB4.0, and also USB Type-A, Type-C, USB terminal male, USB terminal female and so on. What do they mean? What is the difference between them? 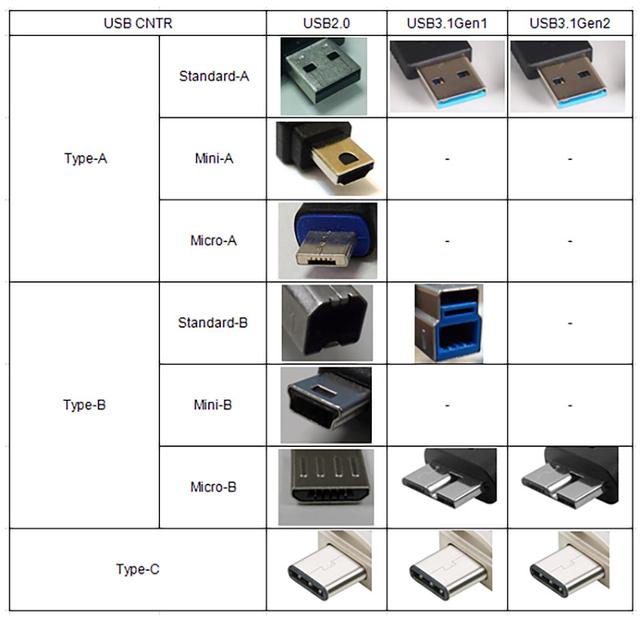 Well, the ones like USB2.0, 3.0 that is mentioned above, refers to the USB protocol version, which represents the iteration of technology, the larger the number, the more advanced the technology, the higher the transmission rate (you can use 2G, 3G and 4G of mobile phone network to understand, the bigger the number, the faster the online services.) In the era of USB2.0, full-speed devices can reach 480Mbps bandwidth (USB hard disk copy can reach a maximum speed of 35MB/s). In the era of USB3.0, since the bandwidth expand to 5Gbps, theoretically two USB3.0 hard disk can copy from each other with a speed up to 300MB/s.
It was supposed to be easy to understand, until something tricky happened, Apple launched a new Macbook Pro computer that year, using a brand-new USB Type-C interface. In order to highlight how advanced the interface was, it named the USB protocol of this interface as USB3.1. But in fact, its transmission speed and functions are no different from USB3.0, the bandwidth are all 5Gbps. Later, a number of other manufacturers saw that Apple had played like this, they all started to use the name USB 3.1, which looks more upscale but does not change the quality, forcing the USB Association to eventually rename the USB3.0 specification to USB3. 1 Gen1. In other words, if you see on the product packages of your mobile phones or computers say that the product supports both USB3.0 and USB3.1 Gen1, they all refer to the same thing, there is no good or bad between them.

As the data waiting to be transferred grow larger, the USB specification is still evolving. In the new generation of computers, the speed of USB 3.1 has been increased to 10 Gbps/s. The USB interfaces that can achieve a transmission speed like this are called USB 3.1 Gen2, also known as SuperSpeed+ USB. The USB3.2 that we have talked about two weeks ago has doubled the speed of USB3.1 Gen2 to 20Gbps/s, and the other parts of it are no different from the USB3.1 specification. However, USB 4.0 is different. Since Intel is making an utmost effort to promote the Thunderbolt3 technology, this technology allows connection between multiple devices, and can eventually reaches a total bandwidth of 40Gbps/s (twice as the USB3.2). Also this interface (line) can also transmit display signals at the same time and can transmit electrical power of no more than 100w. Now that the USB4.0 specification directly copies this protocol, it means that while the USB4.0 can double the transmission speed of USB3.2 to 40 Gbps/s, it can also simultaneously transmit video data and electrical power on the same line and the same interface. But please notice that afterwards, USB4.0 can only use USB Type-C (USB-C) interface.

Refuse to be scammed by merchants - USB-C interface is not equal to USB4.0

Now it is time to talk about the USB interface. When it comes to this USB Type-C, everyone is confused again. Nowadays, many computers, mobile phones, and even new iPads have already adopted the USB-C interface. Are they already USB4.0 specification? There is a scam here. In fact, this is just the merchants trying to deceive everyone. The USB2.0, 3.0, 3.1, etc. just mentioned above are all USB technical specifications, and the USB Type-A, USB Type-B, Micro-USB, mini-USB, USB Type-C (USB-C) mentioned afterwards belong to the form of USB interface.

How to understand this? It will be easier to understand if you have read martial arts novels. You can think of USB1.0, 2.0, 3.0, 3.1, 4.0 as the internal practice level. The bigger the number, the deeper the internal force, the greater the power of the move. And different USB interfaces can be seen as different types of moves. A person with poor internal power does not prevent him from using all the moves, but he can't exert the moves’ maximum power. So some "smart merchants" put what should have been cultivated to a really high level (USB3.1 Gen2, USB3.2, USB4.0) in order to show the true power of the USB Type-C interface to the USB2.0. Of course, there is no stipulation that forbids a 2.0 level to use top-level moves because it is already enough to bluff a layman. Just like an ordinary person who hears "Wanfo Chaozong" would think that this is the most powerful trick in the 18th Palm of the Dragon. 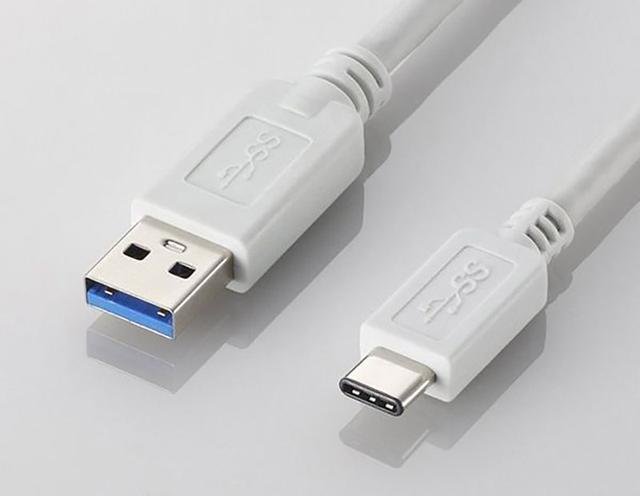 If there is blue plastic in the USB plug, it indicates that this is a USB3.1 high-speed interface (wiring), but the USB-C has no such obvious mark.

For now, the most popular interface is the USB Type-A interface, it is on almost every computer (all notebook will have one), then the Micro-USB (already be eliminated, it was on every mobile phone 5 to 6 years ago) and currently Mini-USB and USB Type-C can be seen on many Android mobile phones. The USB Type-B interface are more popular on peripherals such as printers. For all the nouns above, normal person only needs to remember USB Type-A, Mini-USB and USB Type-C (USB-C), because if your phone run out of battery in the street, and need to ask people to borrow a power bank, you have to tell people what interface you need (the USB interface on your phone), so that people can give you the right line. At this stage, most of the mobile phone data (charging) lines have USB Type-A on one end and Mini-USB or USB-C on the other end. Of course, there are also new data cables that have USB-C interface on both sides, because some new computers (Macbook Pro) or chargers also have this output port. Because USB-C supports USB PD (fast charge) characteristics, this kind of the output port has relatively high output voltage, which can charge the devices quickly.

When will USB4.0 be released? Does it need a special wire?

So far, the USB Promotion Alliance only puts forward the maximum speed and interface mode of the USB4.0 specification, but the whole specific standard protocol and the new USB-C interface definition won’t be released until the middle of 2019. That is to say, we have to wait until the end of 2019 or the early of 2020 to see USB4.0 related products in the market. As for the USB3.2, it might be difficult to put into use. It may not even have any device that supports this standard. They just jump directly to the ultimate mode such as USB4.0 specification + USB-C interface. Because USB4.0 rigidly stipulates the use of USB-C interface (supports positive and negative blind insertion), has small connector, have many peripherals (the iPhone is also going to use USB-C interface in 2020), can supply electricity to the device with high power, and does not need authorization. After the Thunderbolt protocol of Intel went public, manufacturers only need to give Intel a small amount of agreement fee to produce related chips, and the USB data line can be produced even without certification. Due to promotion from the huge mobile phone industry chain, we believe that the popularity speed and standardization of USB4.0 will be more efficient than the USB3.0 era.

Last but not least, unlike Thunderbolt3, USB4.0 does not require the manufacturers' wires to be certified (although you can go for authentication). But if you want to use all USB4.0 functions (maximum transfer rate, 100W power supply, can be used as a monitor cable), a high-quality USB4.0 cable is indispensable. Referring that the current price of Thunderbolt3 certified wire to be more than 44$, the only obstacle in the USB4.0 era might be the popularity of cables. You can go to Apple's official store to check, a 1 m USB-C (bilateral USB-C) charging line is selling at 23$, but a 0.8 m Thunderbolt3 data cable (also bilateral USB-C) is selling at 50$.

You’d better know how to choose vehicle music USB by these points.