Home » Blog » How to choose SSD between NVME and SATA? nowadays NVME is a good option.

How to choose SSD between NVME and SATA? nowadays NVME is a good option.

Because of the progress of flash memory in technology and production, SSD has gradually become the mainstream storage equipment. The speed of mechanical hard disk has been already intolerable. The popular compromise scheme of solid-state plus machinery in previous years seems to be a little weak now. The whole solid-state is becoming the first choice for more and more people to install.

However, there are some differences among SSDs. In appearance, there are two completely different SSDs. One is square, which is close to the image of hard disk in common sense. While the other is slender, which is a little like memory chip. Of course, the SSD differences are not only in appearance but also in inherence. The former generally is SATA SSD, the later is NVME SSD.

Compared with NVME agreement released in 2013, the SATA established in 2001 is obviously senior. SATA was normatively established in the era of mechanical hard disk. Compared with IDE hard disk whose transmission speed is only about 100MB / s in that year, 150MB / s of SATA 1.0 is an epoch-making progress. However, as time goes by, SATA also remains stagnant. Even the upper limit speed of SATA 3.0 has already been 600Mb/s, which is far from its potential for NAND flash memory a new storage medium.

Therefore, a new standard comes into being, which is NVME agreement. Compared with the SATA that needs to be connected to Southbridge chip for transmission, NVME applies to the PCIe channel, which can be directly connected to the CPU for communication, greatly reducing the delay. It's like a direct drive. It's faster than transfer a few stops.

Though SATA also proposed SATA Express interface for increasing speed. However, due to the consideration of downward compatibility, the SATA express interface is very bloated, occupying too many motherboard positions. So it is only short lived. NNME, in fact, has become a synonym for high-speed hard disk.

Thanks to the reform brought by NVME, many manufacturers have started to build SSDs, but considering that the stability of the hard disk is closely related to the data, a NVME SSD produced by a mature brand is obviously more trustworthy. Seagate might often appear in the era of mechanical hard disk, Seagate as a manufacturer with more than 40 years of hard disk development and manufacturing experience is also advanced in NCME SSD.

Seagate Barracuda 510 512Gb NVME SSD applies to superior 3D TLCNAND flash memory. Supported by NVME 1.3 agreement, its sequential read speed is 3400mb / s and the write speed is 2180mb / s. When random reading and writing in 4kb, the speed of Seagate Barracuda 510 SSD can be 350K IOPS and 530K IOPS. No matter in larger file transfer or in common usage, Seagate Barracuda will give you a satisfactory speed.

In reliability, the total written bytes of Seagate Barracuda 510 512Gb NVME solid state drive is 320TBW and an average time between failures of is up to 1.8 million hours, which is enough for SSD. In addition, Seagate provides five years warranty for Seagate Barracuda, which completely express the confidence of Seagate in product reliability. 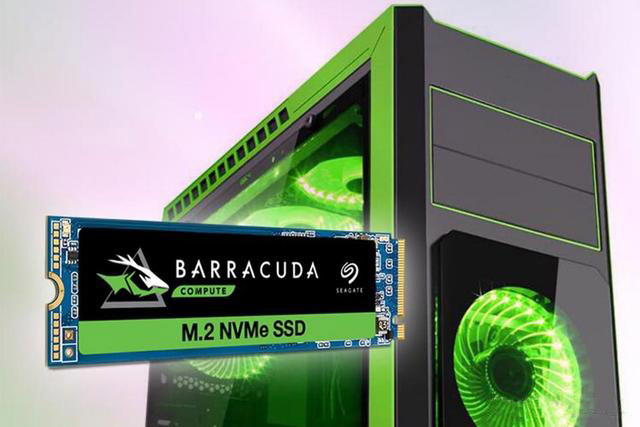 No matter in a new installation or a medium-term small upgrade, the SSD will be a speeder of computer speed, where NVME obviously is a better choice compared with SATA. When we consider the speed, we should consider the data security at the same time. Seagate Barracuda 510 512Gb NVME SSD not only remain high speed but also has reliability. You can upgrade safely and enjoy the frequency brought by NVME agreement.