SD card (Secure Digital Memory Card) is one kind of memory card in bulk based on the technology of semiconductor flash memory, which was jointly developed by Panasonic, Toshiba and SanDisk in 1999. In 2000, these companies established of the SDA (Secure Digital Association), and its strong backgrounds attracted a large number of manufacturers, including IBM, Microsoft, Motorola, NEC, Samsung and so on. Driven by these leading manufacturers, bulk SD card has become the most widely used memory card in consumer digital devices at present.
SD card was originally developed on the basis of MMC (Multimedia Card) card and can be compatible with MMC card, but the data transmission speed of SD card is faster. In addition, the function of CPRM (Content protection for Recordable Media) is specially added for authorized access to data in the card in order to achieve content protection.
The size of SD card is 32mm x 24mm x 2.1mm, which is equivalent to the size of a stamp. A memory card of this size is suitable for digital camera and DV camera, but it is too large for thin mobile phones whose size records are constantly refreshed. In order to meet the requirement of shrinking the size of memory cards for digital products, SD cards gradually evolved into two specifications: Mini SD and Micro SD in bulk.
There are nine pins on the back of SD card, including four data cables, which support two data transmission widths of 1bit and 4bit. The maximum clock frequency is 25 MHZ, so the theoretical maximum data transmission speed is 12.5 MB/S, and the operating voltage is 2.7-3.6 V. 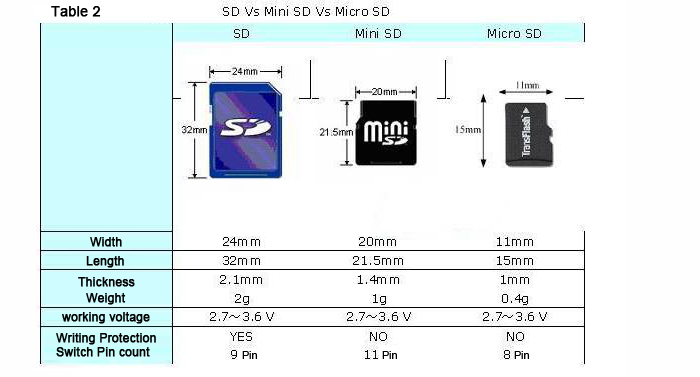 SD cards that follow the 2. 0 specification are called SDHC (SD high capacity) cards. The shape of SDHC card is the same as that of SD card, but the file system is changed from FAT to FAT32, and the maximum capacity of SDHC card is increasing to 32GB. In addition to SDHC cards, there is Mini SDHC cards and Micro SDHC cards.
At present, SD, Mini SD and Micro SD cards in the market all follow SD Spec Ver1.0 or 1.1 specifications, and their maximum possible capacity is only 2GB. In 2006, the SDA Association released the SD Spec Ver2.0 specification, which allowed SD cards to have a capacity of up to 4GB or higher.
SDHC cards are no longer compatible with standard SD cards. The devices conforming to SD Spec Ver2.0 can support SDHC cards, which are marked with SDHC logo. And the devices that support SDHC cards can be downward compatible with standard SD cards.
In order to present the best performance of SDHC cards and ensure the compatibility, SDA Association defines three speed levels for SDHC cards: class 4, class 6 and class 10; and its implication is that the bearable writing speed for each grade is at least 4MB/s, 6MB/s, 10MB/s. Speed level is defined by data writing speed, which is slower than data reading speed.
SDHC cards with the capacity bigger than 2GB must have SDHC symbols and mark the symbols of speed grade.


SDIO (Input/Output) is an IO interface specification. At present, the main function of SDIO is to expand the peripheral operation for devices with SD card slots. The SDIO card is one IO peripheral; it is not the Memory product. The shape of SDIO card is the same as SD card and can be directly inserted into the SD card slot.

At present, there are a variety of SDIO interface peripherals in the market, such as SDIO Bluetooth, SDIO GPS, SDIO wireless network card, SDIO mobile card and so on. These cards have plugs at the bottom that are consistent with the shape of SD cards, and they can be directly inserted into the SDIO card slot (it is same as the SD card slot) of the smart phone and PDA, which can bring rich expansion functions to these mobile phones and PDA. Users can flexibly choose the type, brand and performance level of peripheral extension according to their accurate needs. SDIO has become one standard interface for expanding peripheral functions of electronic gadgets.
When SDIO card is inserted into a device with a standard SD card slot, if the device does not support SDIO, SDIO card will have no response and it will be in an inactive situation, which will not affect the normal operation of the device; If the device supports SDIO, SDIO cards will be activated according to the requirements of the orders by the device.
SDIO cards allow devices to read directly in the form of IO without performing complex operations, such as FAT file structure or data sector. In addition, SDIO cards can also issue “stop” order to the devices, which acts a different way from SD memory cards.