Home » Blog » How to get satisfied bulk Micro SD Card and SD Card?

The type of bulk memory cards

Old users may remember MMC, and video game enthusiasts may also know Sony memory sticks. There have been many external memory cards in various shapes and standards in history. But what remain today are mainly SD cards in bulk and wholesale Micro SD cards, as well as the relatively professional CF cards.
This article mainly introduces SD card and Micro SD card, both of which are the most common cards in the market, and have the most complex parameters marked in the surface of the card, also memory card wholesale like to play tricks with these parameters.
As the parameters of Micro SD card basically agree with that of SD card (excluding the shape), we will use SD cards refer to both of them as follows.

Every time you shop online, the most troublesome thing for you should be the parameters on the card. 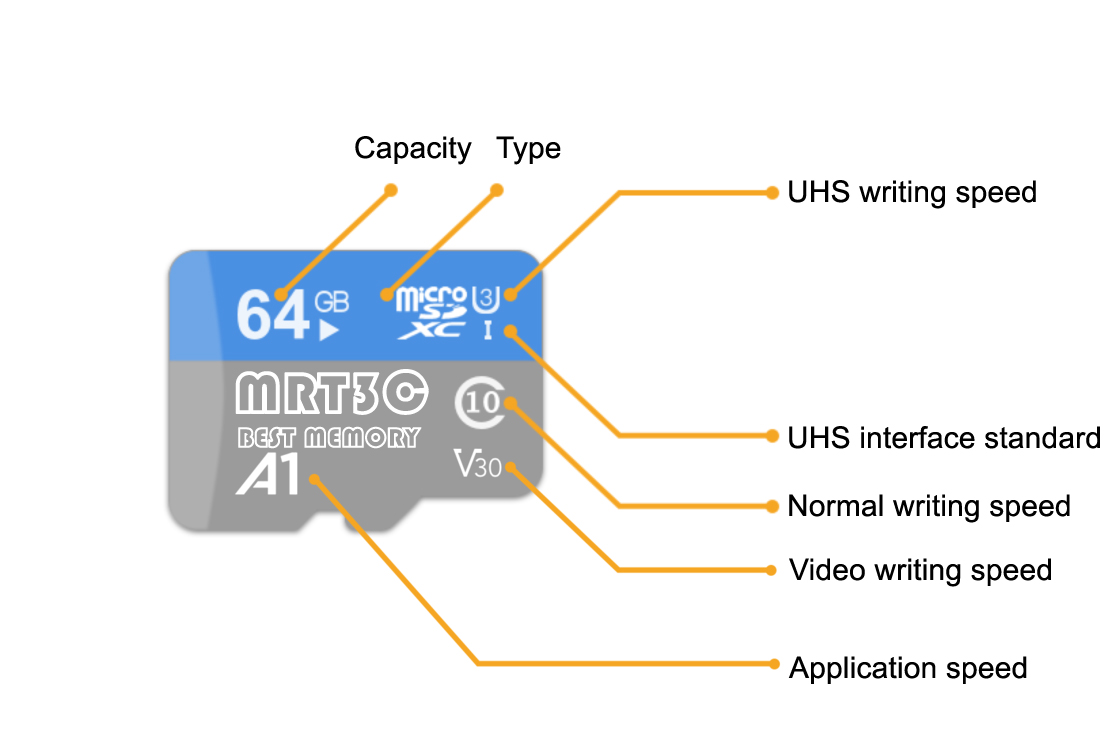 Different brands have different card printing designs and parameter layout. Fortunately, the content of these parameters are based on uniform standards of SD Association，and it only takes a few minutes to get familiar with the meaning of these parameters.
Although all referred to SD cards, there is also a detailed classification according to the maximum capacity. The SDXC shown above is "High Speed Memory Card", which is the latest type with a maximum capacity of 2TB; SDHC is slightly lower, with a maximum capacity of bulk SD Card 32GB. "Pure SD cards" in the name of SD cards alone are rare and the first two have occupied the market today. If you are "lucky" to buy one SDHC card of 64GB, please apply for the privilege of triple compensation because of fake.

Capacity must be the easiest one to understand, while the other parameters need to be explained in details.

The type of interface

At present, many SD cards are marked with "I" or "II". The former means that the card supports UHS (Ultra Hight Speed) protocol, which literally means faster. In fact, it directly means that the maximum interface bandwidth is about 100MB/s. While what really represents speed is the U1/U2 flag mentioned later.
As for UHS-II, it uses one new interface and adds a new row of contacts, which can provide faster reading and writing speed on the devices that support this format.
In addition, UHS-III, released with the SD specification 6.0 in 2017, has been widely used in the market.
All three UHS specifications are downwards compatible. The old device can use the memory card of the new protocol, but the device only can work with the performance based on its speed limit. If you insert one USH-II standard size SD card into the old Sony card machine, it may only write at a speed of 4m/s.
It's easy to recognize USH-II through the interface shapes. 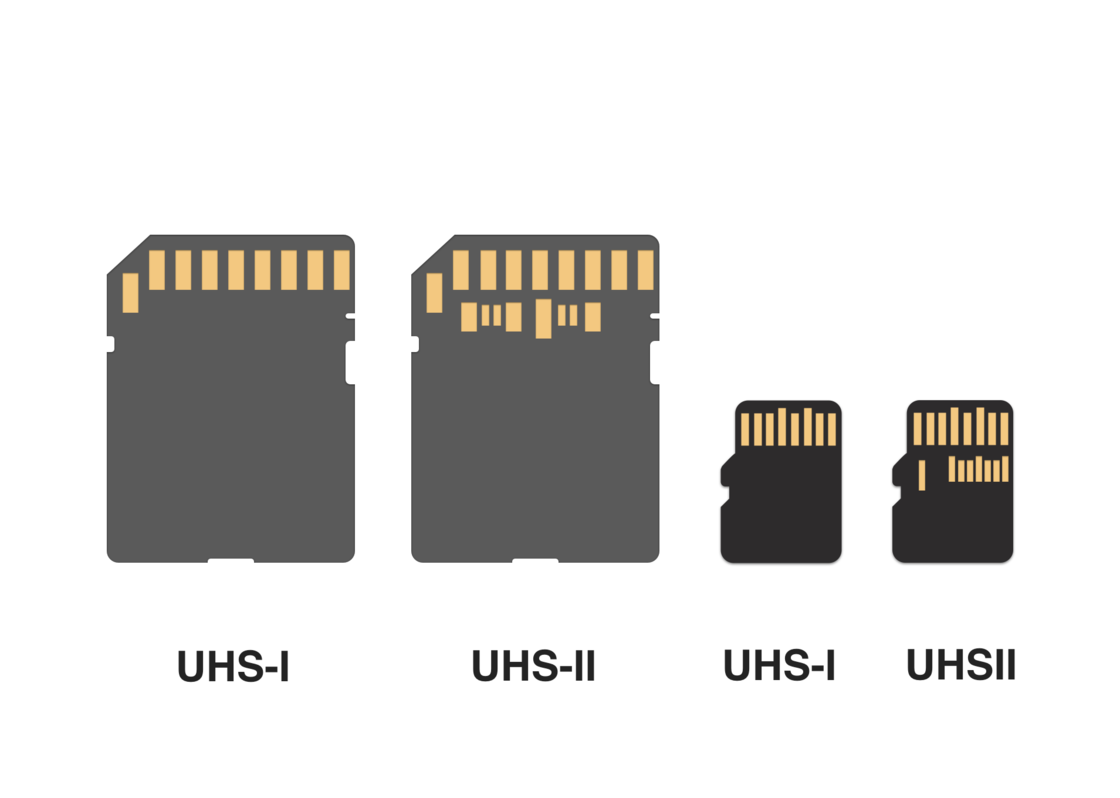 Speed is the most intuitive attribute that can be felt as soon as you use the card. The speed of one memory card is divided into reading speed and writing speed. In general, the reading speed of one memory card is higher, so you often see cards called "200m/s" that is referring to the reading speed. But if the memory card sale doesn't say anything about writing speed, you should leave right away.
The speed of SD card is not only related to its own quality, but also related to the device that reads it. And one card will be marked with different values of speed, meaning its performance in different situations. In order to give full play to the best performance of a memory card, you need to combine the card with the reading device.

The symbol containing a number in C represents the minimum writing speed under normal circumstances. Five years ago, it might be worth showing off to have one C10 card, but now class speed has become the minimum standard.

The symbol with a number embedded in U represents the speed performance that SD card can perform on UHS-enabled devices. Currently there are only U1 of 10M/s and U3 of 30M/s, which means that the minimum sustained writing speed is 10M/s and 30M/s. If you see U2, it's either a fake or a limited edition of U2 band.

Because SD cards are more and more widely used in photography, the SD Association has also issued a video speed standard early, which is marked by the capitalized letter V followed by speed value. And you can see that its maximum speed has reached V90, which can be compared with some CF cards.

Although there are fewer and fewer mobile phones using memory cards, they still exist. And they need to read memory card data regularly and continuously, perhaps without too high-speed requirement, but it is important to ensure transmission stability. In order to make the external memory card to produce the same performance as the built-in memory, the SD Association added the App Performance standard to the SD 5.1 specification in 2017:

In addition to some mobile phones, high-end MP3 players, dash cam, GPS and PSP are also using Micro SD Card, which also attach importance to stability. Then, the Micro SD card with the A1 logo may be the first choice for users of these devices and App Performance currently has only one level of A1.

When choosing SD card, we should take both parameters and source into consideration. If you really don't know what kind of card you need, this form provided by SD Association is worth referring to:
It has to be said that the premium of memory card is getting worse and worse due to capacity. The price of the Micro SDXC card I bought more than a year ago has risen instead of falling. In addition, the market and industry standards also affect the price of memory cards. The demands of supporting 4K video request cards with high speed and large capacity popular. And after the new standards issued by SD Association, old products tend to be renamed and priced higher (or only a very small update), like changing soup without changing dressings.
In short, the speed is the first priority to consider when using the cards. If it's used in cameras, I recommend to buy U1 cards at least. If you have one GoPro, U3, the "high-end products", will be indispensable. In terms of capacity, you can refer to the space consumption of your mobile phone photography/camera. If you do not shoot too frequently, it is more reasonable to choose 32GB and 64GB – the smaller one is not enough and the larger one can be wasteful. If your phone supports an external memory card, or if you own a Nintendo NS, the card with the A1 logo is more suitable for you.
As for brands, I recommend large factories like Samsung, SanDisk and some reliable wholesale memory card supplier. However, the counterfeiting phenomenon of SanDisk is quite serious, so it is better to go to the official store to buy it for the sake of data security or search reliable wholesale source online. By the way, even if it is produced by a large factory, the parameters are not always accurate. So, after you have selected one memory card, you can go to the evaluation website to search for its actual performance.

At present, the main areas of development for external memory cards are high definition photography and motion photography. The large capacity and high writing speed have become a necessary requirement of photography. Even for cameras, the developing HD images are calling for faster and larger storage schemes.

However, it cannot meet the ever-changing needs to pursue the innovation in the speed and capacity of the memory card. Developing new standards and functions, accepting new equipment and new requirements are the ways to break through for the memory card. Wi-Fi transmission and TransferJet, are both beneficial attempts.

The memory card will not disappear in the short term, especially in the more professional field of image. it continues to work. And the better memory cards will also provide users with a faster and safer experience.