Home » Blog » Identifying Logo of Flash Memory to Find the Manufacturers: to Distinguish Between True and False Flash Memory

Identifying Logo of Flash Memory to Find the Manufacturers: to Distinguish Between True and False Flash Memory

Do you want to identify the original flash memory? Let’s look at the white particle.

For instance, the following rougher "self-packaging" white particles don’t have the original package, only the wafer lithography stage is completed in the original factory. The packaging and testing steps behind are done by some Taiwan or mainland companies, so they are also called self-packaging particle. The quality depends on the technology and conscience of the memory cards packaging factory.

What’s worse, there is a covering white particle, the surface of which is originally marked. Owing to some unspeakable reasons, such as the reason that the original manufacturer has declared scrapped and they had to spray a layer of vinyl on it and then remark. If you come across this kind of particles, you will be unlucky, because even if the people on the cover are guilty.

Then, the editor will set an example of original flash memory of Toshiba TR200 Original SSD and teaches you how to identify.

The number of this flash memory particle is TC58TFG8T23TA0D. The common beginning format of Toshiba original flash memory is TC58/TH58.

If the dismantling slice uses the old to remove the new, the fake particle is completely fake. What is mentioned frequently in the past is to polish a fake mark. Actually, to do a fake mark does not have to polish. We can  use the method of covering. The Micron's flash memory used in the Lenovo SL700 SSD below is the fake original mark that is printed after the cover. L84C ODP, 64GB, should be covered by SpecTek, which is also a S-level downgraded particle. This fake mark doesn’t have a Stepping Code of 90 degrees which exists in the original mark of Micron.

The cover of following Micron's flash memory used by Netac may not necessarily be SpecTek, but it may be the dismantling slice. Because it indicates that the cover is dirty, So it is marked again. But, it is not marked with Stepping/Lot code, which is careless.

The Lenovo SL700 Lightning Shark version is the SMI master solution, with fake Hynix flash memory. These third-party sealed test flash memory in Taiwan is openly labeled with Hynix original logo, and is full of mistakes. 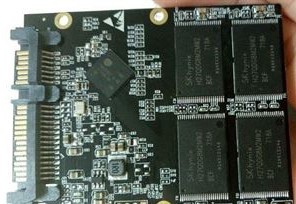 H27qdg8m2mw2-bcf is the Wafer item number of Hynix. The sound part of the whole Wafer is taken away by Apple. The Bin3 of the Good Die is poor. Packaging factory is no logo and intentional people themselves  cover up according to the original factory mark.

In addition to the fake original logo, there are more exaggerated fake methods. For example, Samsung is labeled as a pseudo-original logo for other brands such as Intel and Toshiba. The most unprofessional case of such fraud is this:

The fake Intel particles in the above picture are clean and have no sensation of dirty. It may be because he is changed directly from fake logo to the white-faced Hynix OQ. OQ is out of quality. Through the BGA316 empty soldering station on the PCB board, you can know that it is not the Intel flash memory in the logo. The BGA252 contacts of Intel flash memory is like this:

Let’s take a look at the true SK Hynix flash memory contacts of BGA316, which is the front of the fake flash memory SSD empty soldering station.

It is a common method of many counterfeiters to label second-hand Samsung dismantling slice and some unqualified flash memory of glossy Hynix as Intel. The market generally considers that the quality of Intel is good, so it is better to imitate Intel. The superhuman family is made up of the TECLAST, Kimtigo, Netac and Lenovo, which all love to use fake Intel particles.

Samsung has never brought packaging slice for a long time. If you has seen the following type of SMI master and the original Samsung flash memory, it must be the dismantling slice, which is the reason that some manufacturers changed Samsung’s mark.

Though the definition of Toshiba’s flash memory number, we can see that TC58 stands for single-chip package, indicating that the flash memory contains a small die. And, TH58 represents multiple flash memory dies in the flash particle.

The die here refers to a small square (chip) on the wafer. Flash memory wafers finish multiple inspections after the lithography process is completed. Only the good one is removed from the wafer by the robot and assembled onto the substrate, and the leads are added and finally encapsulated into black flash memory particles by resin.