Home » Blog » How does the memory card wholesaler play “tricks” on photography?

How does the memory card wholesaler play “tricks” on photography?

Do you remember how you chose the memory card for your current camera? Is it recommended by the merchant or purchased on your own?
I think any photography enthusiast will be confused by the technical terms and parameters on the SD card in bulk, and the choice of the capacity and speed for wholesale SD Card. In fact, there is no need to worry. In the next few minutes, you'll learn about more knowledge of the memory card that many professional photographers don't know about.
The range of camera SD cards available today is in various options, even for professional photographers, they are not familiar with all ranges. SD Cards in different version will be often emerged after a period of time; the camera SD Card wholesaler claims that their products are better or faster than competitors. But for careless photographer, this is a minefield.
It seems to be one common phenomenon to buy inappropriate camera memory cards. In this article, we will explore the range of all available memory cards to help you understand the meaning of all terms, and ultimately find right formats, capacities and speeds for your photography.

Some tricks in market:

At present, many new cameras will be sold together with the gift memory cards provided by vendors, but the capacity is usually very small, and it is a low-end model. So you probably need an extra SD card.
To choose one camera memory card correctly, we need to understand several basic elements

What’s the format of memory cards?

Consumers seldom will choose the format of the camera memory card before purchasing the camera. Before reading the rest of this article, please check the user's manual of your camera to see what kind card format your camera needs. Alternatively, you could open the memory card cover of the camera and remove the memory card to check if the memory cards will fit below formats, this will be operated when the camera is turned off.
SD (Secure Digital)
SD card is the earliest version, and its shape and size is also the most common one so far. The shape is adopted by subsequent SD formats, but the capacity of this format is limited to 2 GB.
SDHC (Secure Digital High Capacity)
This is one common version for camera memory card, but the maximum capacity is 32 GB. They are in the same shape and size as SD format, but they use different file systems.
SDXC (Secure Digital ‘Xtra Capacity’)
SDXC is one standard released in 2009, and its capacity can reach 2TB. It is worthy of mentioning that this type of memory card can achieve the transmission speed of 300M/S, which we call "high-speed card".
Micro SDHC
This can be said to be same as one out of dated Micro SD format (with a maximum capacity of 2 GB), but the capacity range has increased from 4 GB to 32 GB. It is usually using SD adapter together with the micro SD card for the camera, please check below image.
Micro SDXC
It is the upgraded version of Micros SDHC, but has a capacity range of more than 32GB. Similarly, this card format is usually sold with SD adapters.
xD (eXtreme Digital) Picture
This is the FujiFilm format, which can be found on some older Fuji and Olympus cameras. And its maximum capacity is only 2GB.
Memory Stick Duo
Introduced by Sony, this format is compatible with SD camera memory cards.
CF（CompactFlash）
The CompactFlash format has been in the market since the emergency of digital photography. It is used to represent the best speed and capacity, but CF Card has been replaced by new memory card formats, especially SDHC and SDXC formats, as well as new CFast 2.0 and XQD formats.
CFast 2.0 standard
CFast 2.0 is significantly faster than the CompactFlash standard on which it is based. The CFast 2.0 used by camera manufacturers is slow, so some cameras offer dual slots; one is for CompactFlash and the one is for the new CFast 2.0 format.
XQD
It is same as the CFast 2.0 format, XQD is the latest development in the CompactFlash standard.
Eye-fi Mobi
Since 2010, these camera memory cards have been compatible with most digital cameras and are a unique variant of the SD format. They replace Eye-fi X2, which cannot support Eye-fi X2 due to security vulnerabilities.
These cards have built-in WiFi. So when you take photos, they can be automatically sent to any device running the Eye-fi applications, such as your computer, tablet computer or mobile phone, the data transfer is done by the WiFi network. And photos can even be sent directly to Eye-fi 's own cloud-based photo hosting service.
Devices running Eye-fi applications can detect the presence of Eye-fi cards nearby and send them to devices whenever new photos are taken. It can be configured to leave photos on your memory card and send them to your device, basically as a backup facility, or you can automatically delete photos from your camera after they are sent, which means your Eye-fi card will never fill up!
An alternative card for Eye-fi Mobi is a slightly cheaper Transcend WiFi SDHC card, which has the added advantage of turning your mobile device into an external display through its shooting and viewing mode. But its transmission range is not as large as that of Eye-fi.
If your camera already contains WiFi, you won't need these WiFi cards because your camera can already send photos to the other WiFi-enabled devices.

The Speed of different memory Card

Data transmission
The cache space of camera will be quickly filled up by using one slow memory card. The camera must stop working and wait for the cache getting empty before continuing to take photos or video. Therefore, you must have one memory card that meets the speed requirement by the camera. And the user manual of your camera will tell you the minimum requirements on speeds.
There are some “tricks” about the speed of memory card. The memory card manufacturers advertise faster "reading speed" (the speed at which photos are read from the card) rather than slower "writing speed" (the speed at which photos are transferred to the card). This gives error guidance about card performance.
Many digital cameras have continuous shooting mode. This is followed by the ability to take many photos per second (measured by FPS and the number of frames per second). The camera must save these images quickly in order to prepare for the next shot. This requests faster speed when you take RAW images, which occupy much larger size than JPEG.
Some cameras have high frame rates, large sensors and pixels, or provide ultra-clear video recording. These cameras usually need memory cards that can process large amounts of photo or video data at high speed.
It is worth noting that the speed at which photos are read from the card also depends on the device on which they are using. The speed of some card readers is even slower than the cards itself.
Now let's take a look at how to identify the speed of the memory card and which speeds are most relevant to your photography needs.
Data transmission rate (MB/s)
The speed of many memory cards is displayed as the minimum MB/s. The higher the data displays, the faster the data transmission.
The X rating of memory Card 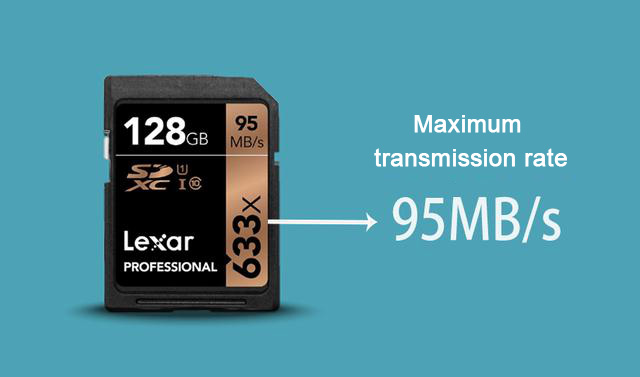 Maximum transmission rate
The “X” refers to the speed expressed in multiples (for example, 200 or 300 times), the speed of which is twice as the original CR-ROM drive is 0.15MB/s (megabytes per second). Speed is the largest sustainable transmission rate. Therefore, 200x equals to 200x0.15m/s = 30MB/s.
If one typical image file is 5MB, you will be able to transfer six image files per second from this memory card. 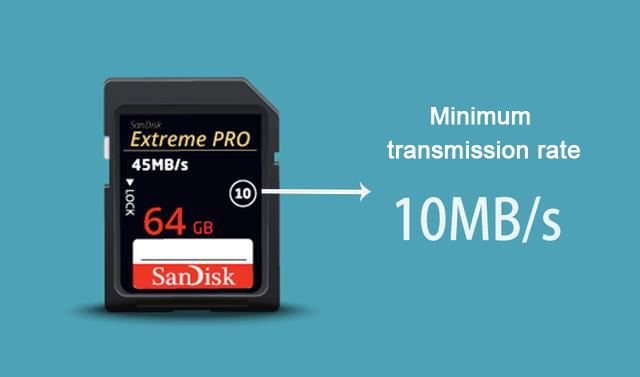 About the capacity of different memory cards

As camera sensors become larger and larger, the number of pixels is increasing, so does the demand for larger memory cards. It's tempting to buy the biggest memory card you can afford. But what if you lost or damaged the card before you got all the photos? It's best to spread the risk of losing photos across multiple cards. So it is better to buy two 64GB bulk SD Card instead of buying one 128GB card. Although this will cost you more, it proves that the cost is reasonable by backup option.
The chart below shows how many photos you can store on the wholesale memory cards of different sizes. To understand the data in the charts, firstly you could select JPEG or RAW according to your preferred image capture format. Then you can check in the left column for the number of pixels closest to your camera. Finally, please focus on the row to see the number of images that each capacity (shown in the top row) can be hold.

About the price of a memory card
The price of the camera memory card has been fluctuating, so we will not show the specific price in this article.
We have to understand the price of memory card is different by different parameters, as it is hard for you to get one cheap memory card with high quality and high capacity.
Option 1: You can buy one cheap, high-quality, low-capacity card.
Option2: You Can buy one cheap, high-capacity, low-quality card.
High quality memory cards are very expensive, so your budget will be the main factor. Let’s find out how to choose suitable memory card for you.
What kind camera memory card is suitable for you?
Did you take any important pictures? This can be wedding photo, graduation photo, birth photo or any other non-repeatable activity, for which you really should invest in better and more reliable brands such as SanDisk, Kingston, Sony, Samsung, Toshiba, and good wholesale OEM Source and so on.
If you take a lot of photos and don't care much about reliability, then you need to choose between capacity and speed.
If you want to use continuous shooting mode or video recording, you need to give priority to speed and capacity.
Instead of buying a high-capacity memory card like putting all your eggs in one basket, you’d better buy more medium-capacity memory cards. This will spread the risk across multiple cards.
But at present, even small brands have relatively high reliability. Memory cards are not as fragile as we imagined, as long as you buy them through regular channels to prevent the purchase of pirated cards.

The good news is that your camera user manual will tell you the memory card format and the minimum speed level you need to buy. You need to figure out the capacity and choose your price range.
Finally, you must be sure to use one card reader compatible with your card. Otherwise, you may find that the transmission speed is much slower than you want.